Hello EitGuide fans. Before jumping into the main content, we just want to let you know that we are making a test. This post is written in English. Sincerely, we hope you guys are gonna like it.

I guess most of you like macOS. Unfortunately, the most advanced operating system is officially available for Apple computers, also known as Mac, such as iMac, Mac mini, Mac Pro and the most popular MacBook, and is only distributed via App Store. So the best way to play with the real macOS is to buy a Mac. However, diamonds cut diamonds, I’m gonna guide you how to install macOS High Sierra on VirtualBox. Yep, VirtualBox. That means you can have High Sierra on a virtual machine on any operating systems including Windows, Linux, and of course, macOS. But if you’re already on macOS, you may think of doing nothing at all, because why on Earth you want to experience macOS on a virtual Mac on a Mac?

Before moving on, you must have these things on your computer and mind:

If you’re thinking of having Xcode installed so you can build an iOS app, then NO, NO AND NOOOOOOOOOOOOOOOOOOOOOOHHHHHH. Lag is your partner. It’s just good enough to compile Electron-based apps which the source code is developed in the host machine.

All right, let’s create a new virtual machine. Experience with VirtualBox is a must so I’m not gonna dig into much details about how to create a VM. You can give it any name you like, I’m gonna stick to “High Sierra” in this tutorial. Once again, this tutorial works with VirtualBox across Windows, Linux and macOS, so you don’t need a Mac although all the following screenshots are taken on macOS. One more thing, I don’t know why the installation process seems much slower on Windows. It took me about 20 minutes on Ubuntu while it took me about 40 minutes on Windows with the exact same hardware. So, my recommendation is to have Linux as the host OS.

In the next screen, let’s give the VM at least 4096MB of RAM. You can throw some more if your system has more available RAM.

Hit Continue and give it at least 30.00GB of storage. After the VM is created, you’ll open the VM settings and increase video memory to 128MB.

In the Storage section, you’re gonna mount the downloaded High Sierra ISO. Finally, hit OK so we have nearly completed VM configurations. The only thing to do next is open Command Prompt (with Admin privilege on Windows) and use the common “cd” to the VirtualBox installation path. Yep, the VirtualBox program folder, not the VM one, the default one is C:\Program Files\Oracle\VirtualBox. If you’re on Linux, the excutable is already in your PATH so you won’t need to “cd” at all in Terminal. If you’re on macOS, you may skip the step though you can give it a shot as much as you love doing so, or just quit the process because you’re already on macOS!

Copy these lines into a temporary text file, and replace “High Sierra” with the VM name you defined when you created the VM. Personally, I took the “High Sierra” name so I’ll replace nothing. If you also did the same before, do the same thing now.

Then copy and paste those lines one-by-one into Command Prompt or Terminal and don’t forget to hit Enter after each line. After it’s done, you’re good to proceed to the next step.

Now, it’s time for the real installation. Yep, this is the real installation for real people. Unlike other tutorials from the internet in which you just need to add an already-installed disk (VMDK) to the VM, we’re installing macOS High Sierra from the fresh scratch. This means everything will be very stable. All right, let’s fire up the virtual machine and give it a minute.

If you have installed macOS before, you’ll see everything is quite familiar. First of all, select English as the language, then select Disk Utility in the macOS Utilities window:

The next thing to do is move the cursor to the top bar of the screen to the View section and select Show all devices. Then move the cursor down to the primary disk, select “Erase” and make sure your Format and Scheme look exactly like the image below while you can give it any name you love, like “Hackintosh HD” or something. Then hit the “Erase” button and wait in some seconds.

All right, after the disk is erased, it’s time to Install macOS after closing Disk Utility. Then Continue, blah blah blah and install to your disk. In my case, the disk is Hackintosh HD.

Let the installer do what it’s made to do. In the mean time, why don’t you grab a cup of coffee because it’s gonna take a lot of time depending on your disk. Be extremely patient and do not smash your computer. Hmmmmmmmmmmmmmmmmmmm… I’m gonna skip the waiting and proceed to the next step after the VM reboots itself.

Now, after reboot, you’re gonna see this weird screen. Yep, it’s weird, and if you don’t see it, there must be something wrong. Of course you must see the weird screen because our VM is not a Mac with Mac bootloader. So, the installer cannot resume itself, but we can force it to by just type “exit” and hit Enter (or Return in macOS). 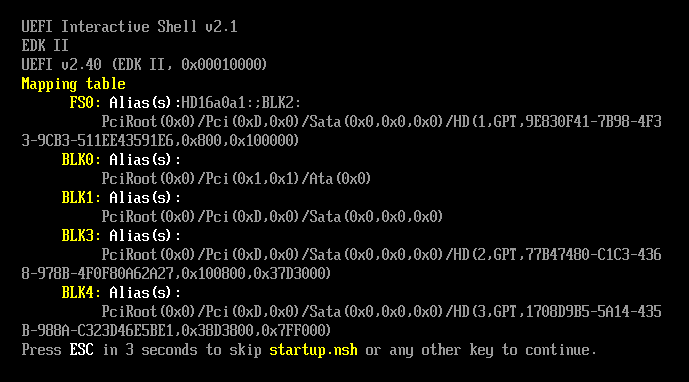 You’re gonna see a similar screen to this one. Move the pointer down to Boot Maintenance Manager and hit Enter. 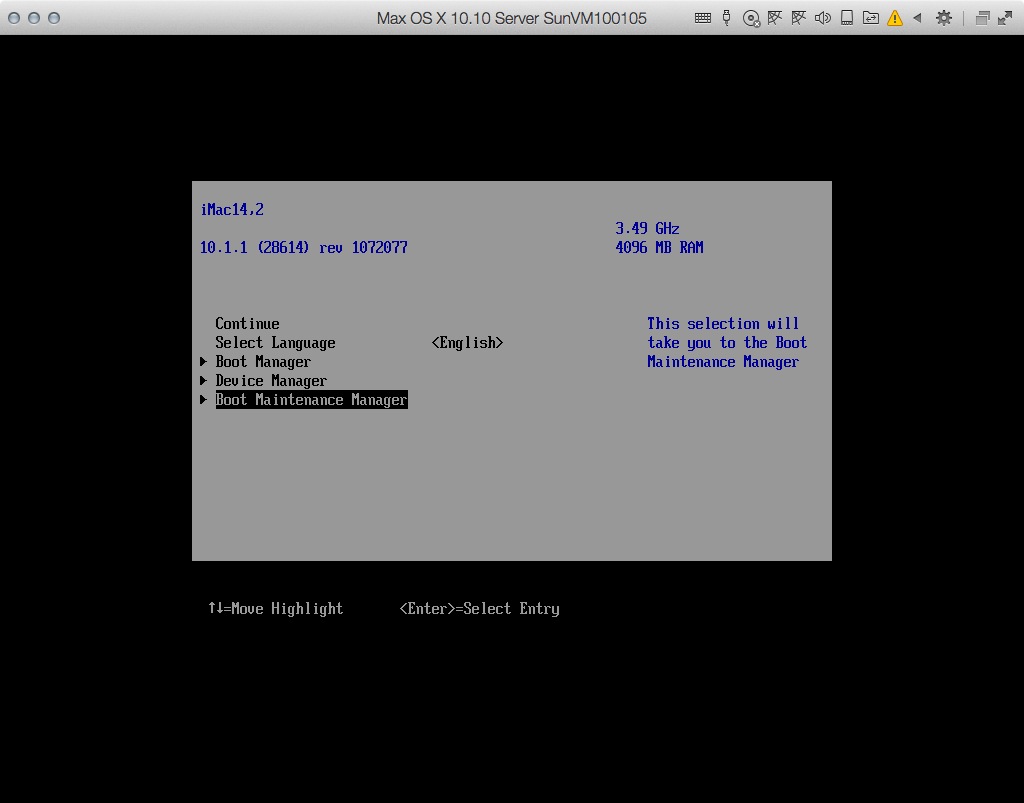 In the next screen which is similar to the image below, select Boot from a file with the arrow and Enter keys. 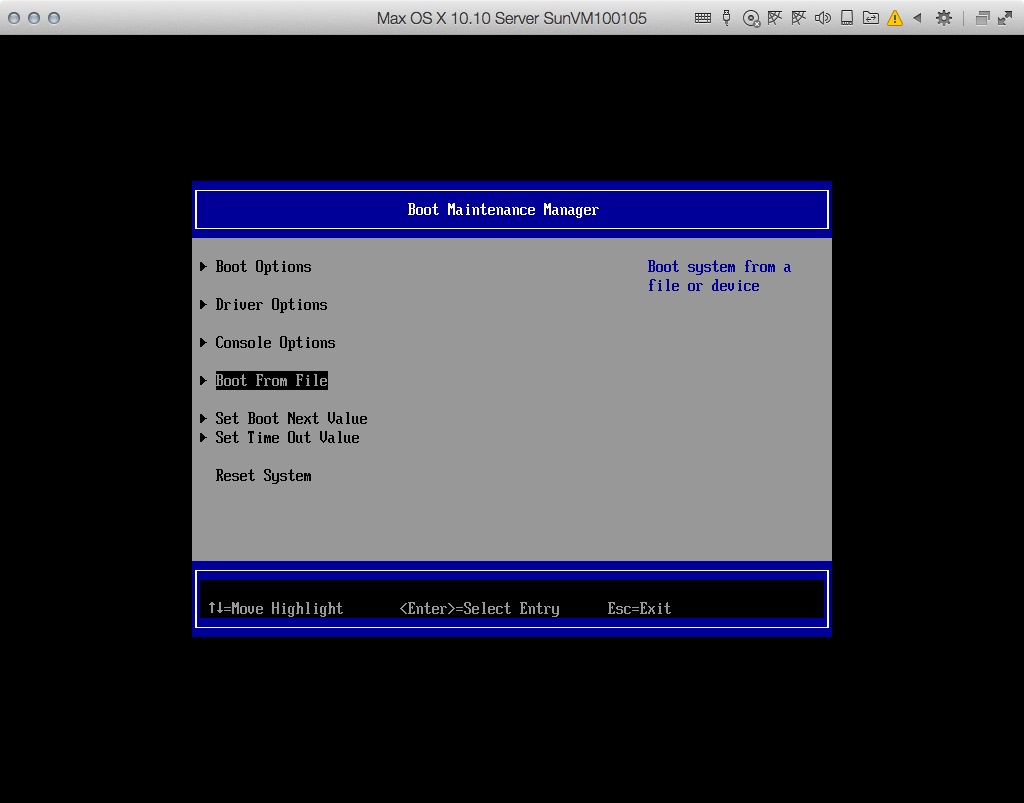 In the File selection screen with 2 or 3 items whose names contain lots of characters, select the bottom one, then <macOS Install Data>, then <Locked Files>, then <Boot Files>, then finally, boot.efi. The VirtualBox Boot manager will boot the boot.efi file that leads us to the continuation of macOS installer. Let it finish and complete the initial set up, then enjoy the laggy macOS High Sierra on VirtualBox and don’t forget to save a snapshot. Hooray, something is better than nothing!

Before saying goodbye, let me remind you: The performance is very laggy. This is because of 128MB of video memory that VirtualBox gives the VM. You cannot change the resolution to any other values that are different from the default 1280*1024 pixels. If you’re compiling Electron apps, the better way to have Xcode binaries is to install the Xcode Command Line Tool instead of the full Xcode from the App Store.

I hope you find my English tutorial is good enough. Thanks for everything and I’ll see you guys in the very next episode.

This site uses Akismet to reduce spam. Learn how your comment data is processed.